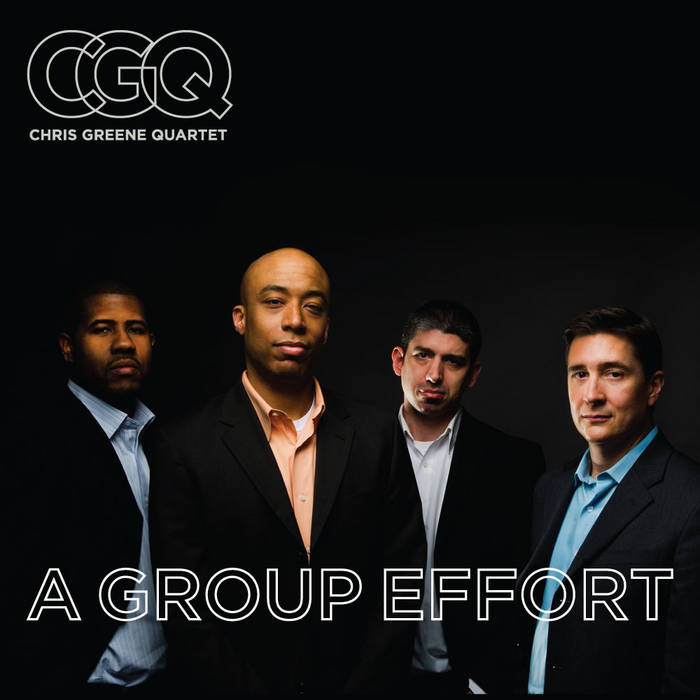 Gary Allen Gardner These four each have the chops to say anything they want. What they do say is usually unexpected, and always interesting. Oh, and they never lose the groove! Favorite track: Shore Up.

Every so often, a band comes along that straddles the jazz and pop scenes. They don’t try to change the world, but they don’t cheat the listener, either; they engage new audiences without dumbing down the music. They respect the tradition but they give it a spin, which slowly builds a base, and then a fan club, and then a real following. Their recordings gain an iconic stature, apart from their objective quality; the talent is there, but the listeners hear more – something else, something that grabs them in ways they didn’t expect.

Over the last seven years, the Chris Greene Quartet has shown signs of becoming one of those bands.

If you want to know why, look no further than the very first track on A Group Effort, titled “Bride Of Mr. Congeniality.” The main theme has an enticing off-kilter bounce, underlined by hip-hop colors from the drum set. That bounce comes from alternating chunks of 9/8 and 4/4 time. But you don’t have to know this in order to appreciate the elastic lope of the melody, or the tenor solo that maintains the rhythmic temper of the theme. And you can go right ahead and dig into the tune’s middle section without knowing that it was lifted, almost verbatim, from a song by Harold Melvin and the Blue Notes (“Bad Luck”), in a sort of acoustic real-time response to modern pop sampling.

Although there’s plenty of planning behind “Bride,” you don’t have to know any of that to appreciate the performance – because the CGQ has done that work for you.

What’s more, this track revisits a song (“Mr. Congeniality”) from the group’s very first album, On the Verge (1998). “Bride” provides a new rhythmic perspective, but at the same time extends a link to the band’s own roots – an indication of the CGQ’s sure sense of purpose, as well as their own history and development.

These guys may be onto something.

“These guys” are saxophonist Chris Greene, pianist Damian Espinosa, bassist Marc Piane, and drummer Steve Corley. They form a band of Chicago brothers with a conjoined purpose: to reach beyond the too-easily dismissed rubric of “jazz” in hopes of engaging a new audience, but without losing the trail that got them here.

As I said above, such bands come along only now and then, which is not nearly often enough. But over the years they have stretched from coast to coast: regional favorites (like the CGQ) whose popularity grew until they finally eclipsed the neighborhoods that shaped them. The list includes a 1950s San Francisco pianist, Vince Guaraldi, whose local fame set the stage for the eventual idolatry that greeted the theme music he wrote for the “Peanuts” TV specials). The list includes a small-town Pennsylvania pianist named John Coates, Jr., whose gentle iconoclasm (captured in recordings made at the previously unknown Deer Head Inn) left its mark on a young Keith Jarrett in the early 60s. It includes Charles Lloyd’s band, which arose from obscurity to suddenly appear on everyone’s turntable in the mid-60s; and the Chuck Mangione Quartet – a solid jazz partnership in the 1970s that grabbed a young new crowd, before their music turned to mush; and, at the top of the list, Dave Brubeck, who two decades earlier had barnstormed the college campuses that soon became his nationwide community.

I’m not guaranteeing that the CGQ will have that kind of success: times have changed, and even music with the right edge can’t always cut through the modern clutter. But if they do get there, I won’t be shocked, either. The great baseball man Branch Rickey said that “Luck is the residue of design,” and in their careful attention to detail, these musicians make their own luck each time they approach their instruments.

For example, listen to “Future Emperor of Evanston” (a nod to Greene’s birthplace and current residence). Piane’s strong bass sets the mood, with Corley’s Latin accents close behind; against that backdrop, Greene’s soprano and Espinosa’s electric piano bring new hues into the mix, neatly framing the lyrical, triple-meter melody. Those are the technical details, but they make this a song you want to hear again – right after you’ve heard it for the first time – and that’s all that really counts. From there, Espinosa and Greene spin solos that dart and spin but stay close to the tune’s essence: they each go on an imaginative musical voyage, but make sure the listener doesn’t get left behind.

Or take Espinosa’s lovely bossa “Shore Up”; it borrows the famous bass-line intro from Horace Silver’s “Song For My Father” before establishing itself as a groove-based melody guaranteed to stick in your ear. Written specifically for this band, it represents the pianist’s desire to combine the mysterious tempo of Herbie Hancock’s “Maiden Voyage” with the advanced harmonies that Chick Corea writes into his music; again, the tune sounds simple, but its origins are anything but. Meanwhile, Espinosa’s other contribution to this set, “Three & Six,” takes a completely different approach, combining post-fusion jazz and a bit of church gospel in a recipe that never fails to make an impact on the band’s audiences.

And how about Piane’s composition “Stat”? Moody but forceful, shadowy but inviting (and irreducibly funky), it has a subtle structure that subverts traditional composition. Piane builds the theme from an off-kilter drum pattern, unconventional harmonies, and a sort of call-and-response by which the saxophone echoes fragments of melody from the piano. It resists efforts to identify the nuts and bolts of its construction, but you can’t really take your ears off of it. Then, on “Blue Bossa” – the one non-original in the set – the band brings a reggae-derived dance accent to trumpeter Kenny Dorham’s hard-bop classic from the early 60s. (Dorham probably wouldn’t mind, since the song was never really a bossa nova to begin with.)

The album’s title should clue you into the cooperative nature of this band: the quartet carries Greene’s name, but it really is “a group effort.” Bass and drums play a huge part in making the music fly; these pieces come packed with infectious but tricky rhythms, and Piane and Corley have tamed that element without draining any of its life-force. And that guy on piano? Fuhgeddaboudit. Espinosa has been with Greene the longest, and it shows: he illuminates the music’s wealth of possibilities with the same ardor as the leader himself.

A Group Effort is the CGQ’s fifth audio album – their second “live” recording (following their 2010 DVD recorded at Chicago’s world-famous Jazz Showcase) – and buoyed by the appreciative autumn crowd, the band bobs along with ease and assurance. They also demonstrate their spirited approach to a jazz conundrum: How to keep the music fresh and new, without resorting to foolishness that dilutes the idiom’s power and promise? For Greene, the answer lies not only in the careful design of each piece, as described above, but also in using familiar materials – the funk and hip-hop he heard growing up – as a bridge to younger listeners looking for more.

A bridge, but not a gimmick. “My intention for using funk, not to be too lofty about it, is the same as that of Bartok or Beethoven, when they used folk melodies as an element in their compositions,” Greene explains. “So when there’s funk in the music, it’s because I hear it there, and not because I’m just trying to please the audience.”

The music isn’t just for kids, by the way. Not so long ago, at a free concert in Chicago, Greene recounts, “a 60-ish black lady comes up – a lady who’d seen a lot in her time, heard people like Duke Ellington and Count Basie – and she said, ‘You know, you guys remind me of how jazz was played back in the day.’ She saw right through all the funk and the other stuff and got the traditional element. She found the honesty; she knew we were coming right out of the tradition.”

I’m telling you. These guys may be onto something.