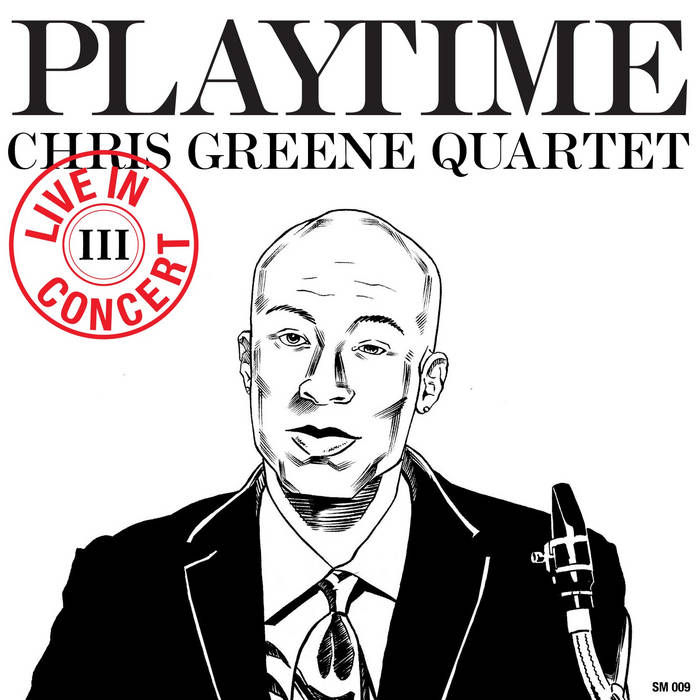 Chicago-based saxophonist Chris Greene and his band, the Chris Greene Quartet, are excited to announce the release of the third installment of their Playtime series, a live soundboard recording from their performance at the 2016 Chicago Jazz Festival. (The Playtime albums - named for the classic 1967 film by Jacque Tati - are a trilogy of previously unreleased live, bonus or bootleg tracks - offered as a FREE download to the public.)

The band has been a presence on the Chicago jazz scene since 2005, and is one of the very few units anywhere that has maintained a stable lineup for the majority of that time (drummer Steve Corley is the newest member, having joined in 2011). Pianist Damian Espinosa and bassist Marc Piane have been with Chris since the beginning, and the band’s music is the kind of tight, telepathic playing that can only come from hundreds of gigs together.

The music on this release ranges from funky modern New Orleans rhythms, reggae, a beautiful ballad, Prince meets Stevie Wonder funk, and even some Frank Zappa-ish freakout, all of it informed by Greene’s immersion in the traditions of straight-ahead jazz, much of which he learned at the feet of Chi-town guru Von Freeman.

The five tracks are Greene’s “Bride of Mr. Congeniality,” which starts with a mysterioso sax-and-bass unison line before morphing into a thoroughly modern funky reimagining of a New Orleans second-line groove; Horace Silver’s jazz standard “Nica’s Dream,” brilliantly re-cast as a reggae one-drop with a New Orleans rumba bridge; “Firecracker,” written by exotica icon Martin Denny, a Prince-meets-Stevie Wonder funk groove with an extremely tricky, but organic-sounding, ostinato; Greene’s gorgeous straight-ahead ballad “Molar Melancholia”; and “Good Riddance,” by Greene, a rock-ish workout that evokes “Uncle Meat” era Frank Zappa, with a saxophone solo that slowly goes outside in the Zappa-esque tradition of “Motorhead” Sherwood before taking it home.

All of the songs are grooving, should one care to move about, but also feature meaty improvisation, should one be inclined to engage the left side of the brain. This release also serves as a foretaste of the band’s upcoming studio CD, “Boundary Issues,” due in March of 2017. See why the CGQ has become one of the standard bearers in Chicago’s highly creative jazz scene! - liner notes by STEVE HASHIMOTO

Produced by Joe Tortorici and Chris Greene
Recorded by Tim Bales at the Chicago Jazz Festival, September 3rd, 2016 except "Speak No Evil."