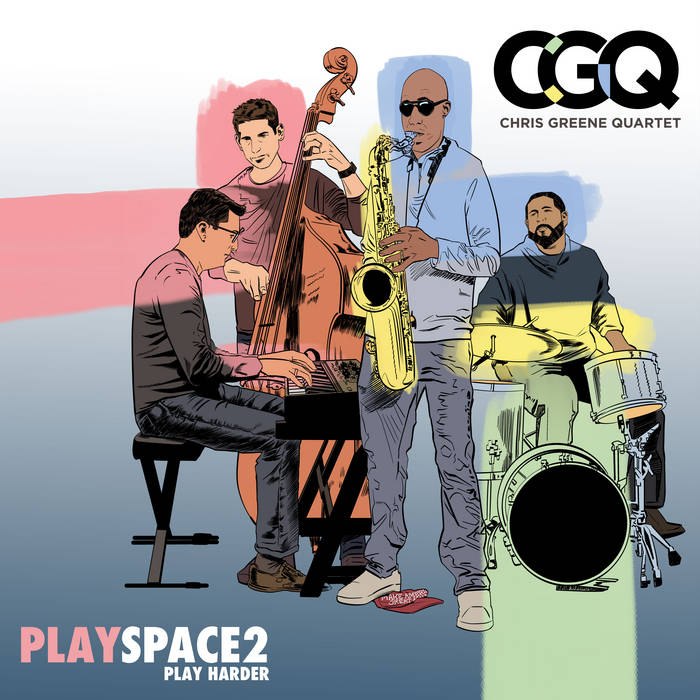 Do you remember Bernie Mac’s debut on Def Comedy Jam? In the pantheon of comedy performances, it’s an absolute masterpiece. But it’s also one of the most instructive pieces of performance art that you’ll ever come across. And maybe, just maybe, it was Jazz, on some level, too. There was the melody statement that our improvisor kept coming back to. There was a band (ok, a DJ) backing him up, supporting him at every turn, and helping him to amp up the performance. He kept calling back to phrases and ideas that recurred throughout the performance, each time, more powerful and impactful than the last. If that seven minutes doesn’t define what great jazz should look like in the abstract, I don’t know what does.

So, it’s telling that the opening moments of PlaySpace 2: Play Harder begin with saxophonist and bandleader Chris Greene setting up a story. Infusing it with winks, nods, and giving hints as to what’s to come. A narrative is established. Smiles grow. Chuckles ensue. The band kicks into a tune. The right words, the right timing, the right inflection, and some effort to get the crowd on your side? Great Jazz musicians and great comedians are much more similar than we might want to think. Dudley Moore put out a string of fine piano trio records. Conversely, Eddie Harris put out a decent comedy album, too. And in the grand tradition of Dexter Gordon, Sonny Rollins, Cannonball Adderley and Branford Marsalis (amongst others), Chris Greene’s playing is imbued with a quick wit, a biting tongue and, above all else, a sense of humor.

The Chris Greene Quartet has been in existence since at least 2005, and it’s existed in its current form since 2011. Having a successful group together for that long ensures that you’ve got four musicians who are breathing together and reacting to each other instantaneously. Sidemen that are willing to buy into your vision long term is a blessing, and Chris is blessed three times over. Pianist Damian Espinosa is a fantastic Jazz keyboardist, playing smart and nimble chords and counterpoints as an accompanist, and his solos are uniformly excellent as well. But, what makes Espinosa really stand out is something that you don’t really see Jazz pianists do that often at all. Check out the way he starts feeding Chris lines and filling out the space toward the end of Greene’s solo on “Divers. That’s much closer to what Page McConnell might do in an epic Phish jam, and it’s an interesting addition to a Jazz pianist’s bag of tricks.  Bassist Marc Piane’s playing is a near constant case study in good taste and economical grooves. And as you’ll hear on the first song here, he’s a helluva writer, too. Drummer Steve Corley is the total package. Swings hard. Throws down on the funk hard. Odd meters? No problem. Killer solo? No problem. As a fellow drummer, he leaves me speechless.   But what about Chris Greene himself? Chris, on both the tenor and soprano saxes, has been in the shed transcribing all sorts of music, going way back to Sidney Bechet and Lester Young, Lucky Thompson and Sonny Stitt, learning one of Stan Getz’s most enigmatic albums in its entirety (Captain Marvel) and really studying the music of Eddie Harris (Chris was supposed to present a concert of Eddie’s material in 2020, and, well…). It all shows. The power, the ideas, the dexterity, they’re all there. And he keeps getting better.

Play Harder kicks off with “Divers” (I’ll let Marc and Chris tell the story). For all of the words tossed around to describe the Chris Greene Quartet, few would use the moniker “avant-garde,” or its 21st century equivalent, “creative music,” but perhaps they should. “Divers” makes a pretty solid case for it. Save for a brief moment of solace in the melody, “Divers” is a heavy way to spend 13 minutes, but it’s quite rewarding. Throughout solos from all four of these guys, we’re treated to a bit of a rollercoaster-esque suite of sorts, complete with peaks, valleys, dips meant to accelerate, and slight curves meant to ease us back down to earth. Except on this ride, we exit somewhere in the middle of the stratosphere. Which is ok. It’s one of the beauties of Jazz.

The sole studio effort on Play Harder is Greene’s composition “Samba Fu Maga.” Let your imagination go wherever it wants to on that one. Musically speaking, this is a Chris Greene Quartet tune through and through. A samba in 7/8. A hummable melody that will get stuck in your ear. A rhythm section getting funky over an improbable groove. Greene’s concise solo takes rhythmic ideas and twists them and turns them inside out, not unlike a late 60’s Eddie Harris.

The other three songs on the album were written by other folks. And you couldn’t have picked three more disparate songs if you tried. It’s a testament to Chris’ ears (and possibly a sense of humor) and to his bandmates’ willingness to follow a vision that they could jump right onto a song each from Duke Ellington, George Duke and Hank Williams.

“Caravan,” as a performance here, is a series of wise decisions. Slowing down the tempo and eschewing many of the “latin” clichés? A wise decision.  A piano and bass groove that leaves acres of space? A wise decision. Chris Greene whipping out the soprano and going to town, evoking Coltrane while never trying to mimic him? A wise decision. Steve Corley playing a sparse collection of toms and shells, right up until nearly the end of the tune when he finally swings the bridge? Brilliant. Steve’s true moment to shine comes on George Duke’s “Omi (Fresh Water).” The Quartet recreates Manolo Badrena’s overdubbed percussion orchestra with plenty of drum set and hand percussion, and when Corley does take over for an extended solo? Oh man, we are all the better for it. And that leaves us with some Hank Williams music. “You Win Again” showed up originally (Chris Greene-wise, mind you) in a much shorter form on Soul and Science 2: Electric Boogaloo. And I’ve seen the CGQ perform it live a number of times. It’s a lament, a bluesy sermon, a barnburner and a showstopper all in one. And there’s an easter egg in there, too. At least in this version. You’ll know when you hear it.

Play Harder was recorded (mostly) live in front of a hometown crowd at SPACE in Evanston in 2019, and these four ventured into some pretty interesting territory, as they often do. And while you’ll hear the influences of saxophonists Eddie Harris, John Coltrane and maybe even Maceo Parker, you also hear the loose wit of a Dave Attell, the wisdom beyond their years of a Richard Pryor, and the downright brilliant timing of Bernie Mac. The last time I saw them, they were still a quartet of patch-eyed, peg-legged, bad dudes who could throw down.

You don’t understand. KICK IT!

Track 5 recorded at The Laundry Room, Berwyn, IL on September 12, 2021 by Marc Piane

Track 6 recorded at SPACE on March 1, 2020 by Yasmine Mifdal
Mastered by Rob Ruccia at Uptown Recording